Despite the XFL canceling their rebooted first season due to the Coronavirus pandemic in the USA, two XFL star quarterback’s PJ Walker (Roughnecks), and Jordan Ta’amu (Dragons) have signed contracts for NFL teams. 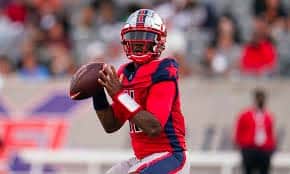 PJ Walker was the first to sign with the Carolina Panthers not long after the XFL canceled their season; however, he is not the only XFL star to be picked from the litter now that Jordan Ta’amu has been signed to the defending Super Bowl Champions Kansas City Chiefs.

PJ Walker was the top-rated quarterback in the XFL for their 5-game season that ended abruptly. Walker led the XFL in Passing touchdowns and passing yards while having his team poised for the XFL playoffs.

The Panthers have released Cam Newton this offseason after they signed Teddy Bridgewater to a $63 million-dollar multi-year deal. Walker’s contract is not so sweet but still puts more than $1.5 million in his pocket for the 2020/21 season. Walker will also be eligible for on-field and off-field bonuses.

Carolina is looking to rebuild after they released coach Ron Rivera who later signed with the Washington Redskins. The Panthers haven’t scored a playoff win since 2015 when they beat the Arizona Cardinals in the conference championship. However, in 25 seasons, they have yet to win a Super Bowl. 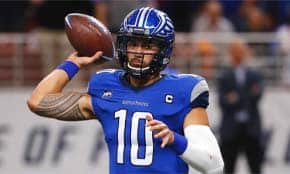 Jordan Ta’amu was the third-rated quarterback in the 2020 XFL season and had the highest completion percentage among all quarterbacks in the league. Despite only throwing five touchdowns with two picks, the Chiefs saw something in him they liked.

The Chiefs already have three quarterbacks on their roster, including 2018 NFL MVP Patrick Mahomes, so it is unlikely he will see the field, but Ta’amu could win a Super Bowl ring if the Chiefs can repeat last year’s performance.

The XFL is slated to begin its 2021 season after the 2021 Super Bowl in Tampa, Florida. There have been talks of expansion teams joining the league, but nothing has been confirmed as of now. Despite having to cancel the 2020 season due to the pandemic, the 2020 season was seen as a huge success delivering quality football for fans around the US. While the ratings had slipped since week one, the excitement surrounding the start-up football league did not.

18-year-old bettors can bet on XFL games with the use of offshore sportsbooks and brick-and-mortar locations that accept 18+ bettors.

The Coronavirus is still spreading and becoming one of the most historical events of modern times. Due to the recent pandemic, many people around the world are experiencing social distancing, a toilet paper shortage, and […]

August 4, 2020 admin News Comments Off on Vince McMahon Looking To Sell XFL To Dwayne “the Rock” Johnson For $15 Million

Pending court approval, the XFL could be back on the field with new league owners in the near future.  The XFL filed for bankruptcy in April after the 2020 reboot was brought to a halt […]

The XFL is now entering week 3 of the regular season, and teams and fans around the world are excited and optimistic, given the initial response to the new American football league.  Week 1 was […]