Award show season is always a fruitful time for entertainment betting lines. Between the Emmys and the Grammys, sportsbooks certainly don’t have to look to the bottom of the barrel to build new lines.

MTV’s Video Music Awards lacked significant coverage prior to the event, meaning that sportsbooks did not bother to include odds for it. However, the VMA’s would see sports and entertainment overlap in a new way.

On the red carpet, celebrities from every side of the entertainment industry made appearances and posed in their designer outfits. Listed among the most well-dressed of the evening were rapper Machine Gun Kelly and his girlfriend Megan Fox.

Being one of the hottest new couples in Hollywood, MGK and Fox were held up for several minutes doing photo ops. Nearby, MMA fighter Conor McGregor was posing with his wife.

While McGregor can be seen wearing a smile from ear to ear in the earlier press photos, emotions got tense very quickly and an altercation began. 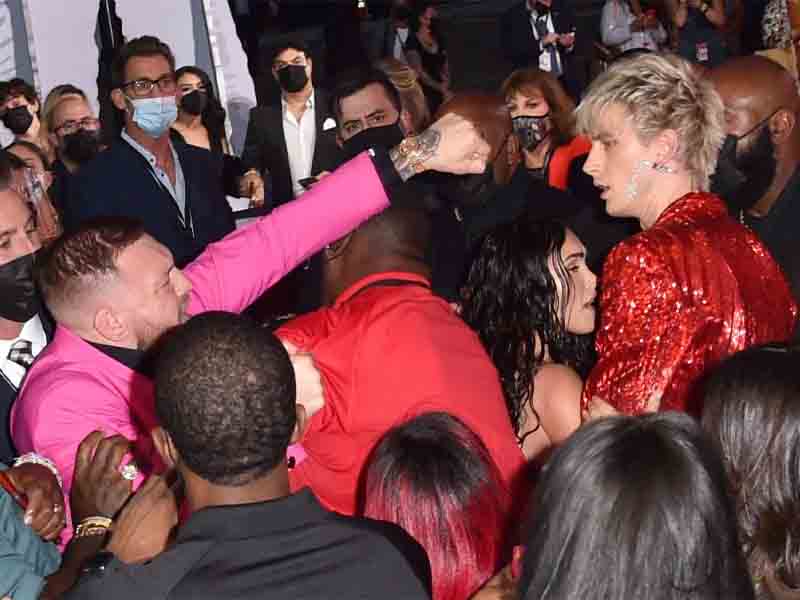 Everyone on the Internet woke up to an iconic image of Conor McGregor throwing a swing across a crowd at Machine Gun Kelly. Most would hardly call what happened a fight, as no contact was actually made. Nonetheless, the news has dominated headlines.

Some reported that Machine Gun Kelly denied McGregor a photo op, causing the fight. Representatives for the MMA star quickly refuted this claim. The reason for the fight’s start remains a rumor, though we expect more information on the subject to surface soon.

In light of this celebrity altercation, Bovada has posted odds for a potential fight between Conor McGregor and Machine Gun Kelly.

To be clear: there is no scheduled fight between Machine Gun and Conor McGregor. These odds have come out of speculation since the VMA’s ordeal.

Honestly, it is unlikely that there will be a fight. Conor McGregor does not seem keen on entertaining the idea at all. The MMA fighter put it this way:

“I only fight real fighters, people that actually fight, you know what I mean[?] I certainly don’t fight little vanilla boy rappers. I don’t even know the guy. I don’t know anything about him, except that he’s with Megan Fox.”

Nonetheless, celebrity fighting is rapidly growing in popularity thanks to the Paul brothers. There is no doubt that a fight between McGregor and Machine Gun Kelly would result in a massive turnout.

Why Khabib Nurmagomedov’s Retirement From The UFC is Disputable

November 17, 2020 admin News Comments Off on Why Khabib Nurmagomedov’s Retirement From The UFC is Disputable

Modern-day UFC fans quickly point out Khabib Nurmagomedov’s perfect record (29-0) and sheer dominance in the UFC lightweight division.  After Khabib took down Justin Gaethje in UFC 254, he abruptly announced his retirement from professional […]

UFC 277 is just around the corner, and many fans are excited to bet on the outcome of the two main events: Pena vs. Nunes 2 and Moreno vs. Kara-France 2. While both bouts are rematches, […]

Boxing For A Cause: Pacquiao Vs. McGregor

October 20, 2020 admin News Comments Off on Boxing For A Cause: Pacquiao Vs. McGregor

Filipino boxing legend Manny Pacquiao’s team has confirmed that Pacquiao will fight UFC Legend Conor McGregor in 2021. That part of his proceeds from the fight will go to relieve coronavirus victims in the Philippines.  […]

December 9, 2022 Comments Off on Betting On The College Football Playoffs: How To Bet The CFP Odds At 18+