Logan Paul is the older brother of Jake Paul, also a YouTube content creator, who entered the ring with Nate Robinson last week. Despite the brother’s similarities, Logan seems to be in over his head with the Mayweather fight looming. We have only seen Logan fight in two exhibition fights vs. KSI, and most people will agree that he is doomed against Mayweather. Below is Logans last fight against KSI that went to a decision.

To be fair, Logan probably would have won the fight if not for the deductions he received, but it was close. The most significant difference between Logan’s last opponent and his next is that KSI is a YouTube content creator from the UK, Mayweather is a decorated professional boxer.

Floyd Mayweather is also considered by many to be the best boxer ever with a perfect 50-0 professional fight record. In Mayweather’s last fight, he went toe to toe with UFC elite Conor McGregor where he beat him easily by dancing around for a few rounds before taking McGregor out in the 10th.

Some fans later accused Mayweather of milking the clock so that future events will be seen as worthy for pay-per-view (PPV). However, Mayweather is known to dodge for a few rounds while his opponent tires before going for the win.

Oddsmakers seem to agree on one thing, Mayweather is going to win. Not long after the fight was announced, 18+ online sportsbooks started posting odds for the fight. Below are the current odds offered at BetOnline.

Over the years betting on boxing has grown tremendously due to the ease and availability of gambling online. Today US bettors have several legal options for betting on the sport, including 21+ domestic sportsbooks in legal states and 18+ online sportsbooks operating legally offshore.

While this fight’s value is on Logan Paul’s side ($100 bet wins $1500), most bettors will save their money as that outcome is not likely. However, if you feel that Logan Paul can take out the 43-year-old legend, put your money down because these odds can’t be beaten.

Whatever the fight’s outcome, it is sure to draw big money on PPV, and Logan Paul will have more content for his YouTube page. 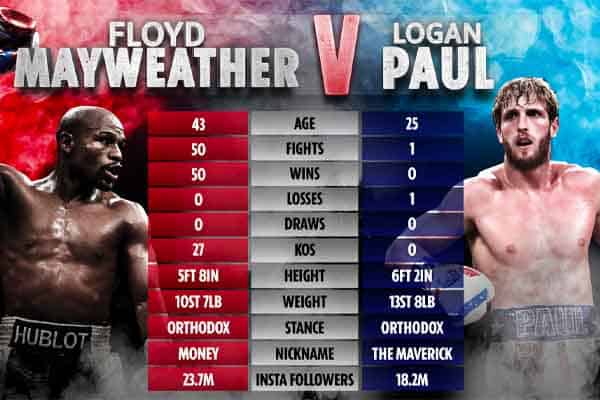 Boxing For A Cause: Pacquiao Vs. McGregor

October 20, 2020 admin News Comments Off on Boxing For A Cause: Pacquiao Vs. McGregor

Filipino boxing legend Manny Pacquiao’s team has confirmed that Pacquiao will fight UFC Legend Conor McGregor in 2021. That part of his proceeds from the fight will go to relieve coronavirus victims in the Philippines.  […]

Jake Paul Odds For Next Opponent Live Across 18+ Betting Sites

May 10, 2022 admin News Comments Off on Jake Paul Odds For Next Opponent Live Across 18+ Betting Sites

Jake Paul has been a household name for quite some time now, having been known for his social media antics. But, in recent years, Paul has made a name for himself in the world of  […]

Why Khabib Nurmagomedov’s Retirement From The UFC is Disputable

November 17, 2020 admin News Comments Off on Why Khabib Nurmagomedov’s Retirement From The UFC is Disputable

Modern-day UFC fans quickly point out Khabib Nurmagomedov’s perfect record (29-0) and sheer dominance in the UFC lightweight division.  After Khabib took down Justin Gaethje in UFC 254, he abruptly announced his retirement from professional […]

December 9, 2022 Comments Off on Betting On The College Football Playoffs: How To Bet The CFP Odds At 18+