The Major League Baseball (MLB) postseason is upon us as four teams are ready to begin the wildcard round to see who will make the final cut into the MLB postseason playoff bracket.

In 1903 the two Major League Baseball leagues (American & National) started postseason play with a one-round postseason system, now there is a wildcard playoff (1-game), two-division matchups (best of 5), one league championship (best of 7), and one World Series (best of 7).

Below is the current MLB playoff bracket for the 2019 postseason. 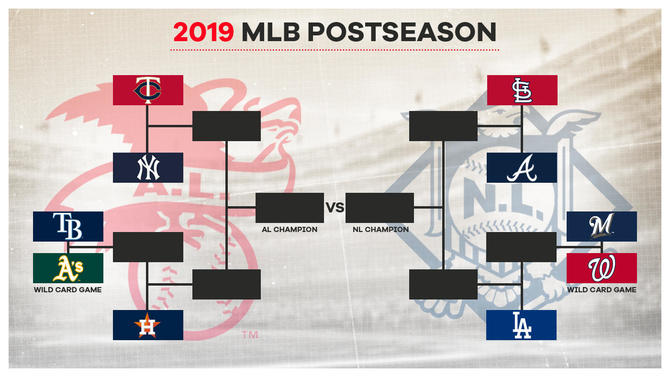 The Astros and the Dodgers are heavy favorites going into the postseason. The Dodgers have been to the World Series the last two years but came up short in the end. Dodger fans are hoping that the third time is a winner or else they fear they will start to be looked at as the Braves of the ’90s.

Online sportsbooks offer MLB game lines and futures to anyone over the age of 18, and they operate legally in the United States despite no regulations based on U.S. gambling laws.

Game one of the wildcard series will feature the Milwaukee Brewers (89-73) vs. the Washington Nationals (93-69). The Brewers will have to travel to D.C. to defeat the Nationals to win a chance to dethrone the Los Angeles Dodgers who finished first in the National League with a win percentage of .654 (106-56).

The Dodgers have been red hot and arguably have the best pitching staff in baseball. Whichever team makes it into their bracket will have a hard time surviving the divisional matchup.

Below you will find the odds for the wildcard round. Based on BetOnline odds, the Nationals are favored to win the one-game series.

The Tampa Bay Devil Rays (96-66) will have to travel to California to face the Oakland Athletics (97-64) in game one of the A.L. wildcard. Both of these teams played good throughout the season and earned their spot in the one-game series.

The winner of the A.L. wildcard round will have to face the Houston Astros (107-55) who just edged out the Dodgers for the best regular-season record in baseball for the 2019 season. Whichever team gets through the wildcard will have their hands full for the next five-game series against Astros.

MGM Resorts strikes a partnership deal with yet another popular sports league. The MLB changed its stance after years of demonizing sports gambling once the US Supreme Court struck down a US gambling law (PASPA) […]

MLB Returns with Game Lines and Future Odds For 18+ Bettors

July 23, 2020 admin Uncategorized Comments Off on MLB Returns with Game Lines and Future Odds For 18+ Bettors

It’s been nine months since we saw the Washington Nationals steal the 2019 World Series from the Houston Astros in seven games. Now, with the delayed 2020 season set to throw the first pitch, bettors can find […]

After winning the World Series in 2020, the Los Angeles Dodgers are hoping to repeat in 2021 and have retained some key elements to put them on top of the odds boards at several 18+ online […]