Filipino boxing legend Manny Pacquiao’s team has confirmed that Pacquiao will fight UFC Legend Conor McGregor in 2021. That part of his proceeds from the fight will go to relieve coronavirus victims in the Philippines.

While all the fight details have not yet been confirmed, Pacquiao’s assistant Jayke Joson has confirmed the rumors and said that the fighter’s lawyers are finalizing the exhibition fight’s confidential details. Joson has also confirmed that Pacquiao wants to donate a huge portion of his prize earnings to Filipino Covid-19 victims.

News about the exhibition bout emerged when Conor McGregor tweeted out:

Anyway all water under the bridge who gives a fook.
I’m boxing Manny Pacquiao next in the Middle East.

Since the notorious tweet, Mikey Garcia, a professional American boxer with a professional record of 40-1, has chimed in, stating that Pacquiao’s next fight will be against him.

Conor McGregor has also announced that he has accepted a UFC fight against Dustin Poirier on Jan. 23, 2021, before the Pacquiao exhibition fight. This fight offer was supposed to be in 2020, but due to ongoing events, UFC president Dana White could not get McGregor/Poirier on a card. McGregor’s next UFC fight will take place in Jerry’s World, the Dallas Cowboy’s stadium.

Betting on boxing has long been associated with the combat sport. From the days long before Don King’s crazy hair until now, betting has been a highlight for many boxing fans looking to win extra funds. Today, betting on fighters is easier than ever with the repeal of PASPA across the states and online sportsbooks taking action in the US.

Future odds have already surfaced for the Conor McGregor – Manny Pacquiao fight. Online sportsbooks like Bovada have Pacquiao favored to win, but there is good value for anyone who wishes to put their money on McGregor. 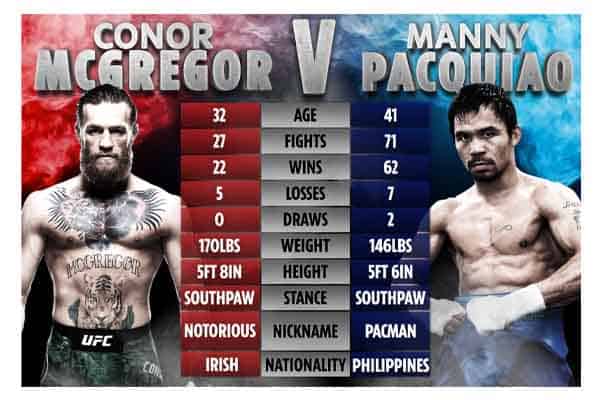 Award show season is always a fruitful time for entertainment betting lines. Between the Emmys and the Grammys, sportsbooks certainly don’t have to look to the bottom of the barrel to build new lines. VMA’s […]

Boxing is back this weekend with what many expect to be one of the biggest exhibition fights to date between Logan Paul and Floyd Mayweather Jr.   It is doubtful that this fight will exceed the […]

Jake Paul Odds For Next Opponent Live Across 18+ Betting Sites

May 10, 2022 admin News Comments Off on Jake Paul Odds For Next Opponent Live Across 18+ Betting Sites

Jake Paul has been a household name for quite some time now, having been known for his social media antics. But, in recent years, Paul has made a name for himself in the world of  […]